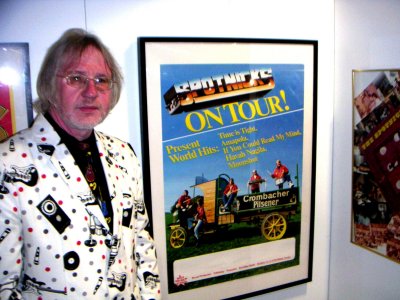 The ROCK-MUSEUM in Siegen, Germany, started an exhibition on September 8 to October 1, 2010.

The motto is FLY ME TO THE MOON and shows hundreds of things about Rock-Music and Space such as posters, photographs, records, record-sleeves etc. from all parts of the world.

This, of course, meant that also The Spotnicks will have a part in this exhibition.

My friend Erich Steuber from Hilchenbach had heard about this exhibition and made contact to the people who are running this museum.

I borrowed them a number of posters, photographs, record-sleeves, buttons and also an old acoustic guitar which was signed by the Spotnicks.

This led to an invitation for the opening night and I was there with my friend (and drummer in my own band) Klaus.

It started with the official talks by the sponsors, the owner of the museum and also a journalist from a German rock magazine.

From the Spotnicks they had included some of my posters and a glass box with records, buttons, CDs and a photo.
I had brought with me the signed guitar which was shown and it will be put in a box in these days.

The guitar was also shown in a newspaper article about the opening night.

And, of course, there was a fantastic dinner with excellent wines.

STRAWBERRY FIELDS FOREVER for a strawberry-dessert
WHISKY IN THE JAR for another dessert creme which included whisky
HIGHWAY TO HELL for a hot meat salad spiced up with chilis.

The exhibition is really fantastic.