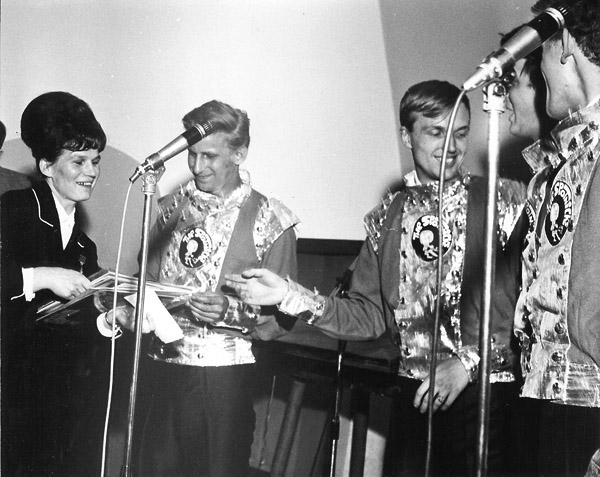 A journalist-dj named Ezio Degradi is recurrent presenting a Radioshow ”AROUND THE TIME-SIXTIES TOWN” (a programme with and about music from the 60’s) at the radio station Radiopopolare-Milano in Italy.

He informed me in advanced by e-mail that late in the evening on February 24 he was going to play the song VALENTINA (Save the last dance for me) by The Spotnicks and he asked me;

”Can you tell me who was Valentina for whom they changed the title of the song?
Thank you and good work, Ezio Degradi”

Well, I wrote him the story (after I had it confirmed by Bob Lander) like this:

The thing is that The Spotnicks since the very beginning is closed associated with everything that has to do with the SPACE.
In fact the group is named after the very first Soviet satellite “Sputnik”.
They used to play with a special “space sound” and they performed on stage during the 60’s wearing space suits as a gimmick.
Many of their songs have a space theme such as Moonshot, Rocket Man, Cape Kennedy, Space Walk and many others.

So it is with “Valentina” as well.
It was recorded and released in 1963 and the same year on June 16 the Soviet cosmonaut Valentina Teresjkova made her spaceflight around the globe as the first woman ever.
The Spotnicks (their manager) decided to name the song “Valentina” because of her “space relation” and to honour her.
The song was first released on the LP “The Spotnicks in Spain” which came out later that year in Sweden and many other countries.
There are three versions published; the “normal” and most common one plus one much slower and another much faster. All of them was from the same recording but with changed speed.

The Spotnicks and Valentina Teresjkova actually met a few years later when they had the opportunity to tell her about what I just have told you (see attached picture).
It was in 1966 on a special space expo in Stockholm and The Spotnicks played another song to her honour at that event.
The song was “Sentimental Guitar” with the alternate title “Vostok 6” after the name of her spaceship.

I hope you are satisfied with this answer and the story behind the song title.

I also informed Ezio that The Spotnicks still is performing on stage – and two of the original members from the very beginning are still playing.

Ezio told the story (in Italian) and played the song, in fact he spent quite a long time to The Spotnicks in his show that evening.

A web-blogg by Håkan Carlberg have this information about Ezio Degradi:
An Italian rock star from the 60s is the host and ”rock music professor” Ezio Degradi from Milan. He tells me that he released 30 single records during the 60s. Many of the songs are translated famous songs. Since many years Ezio own program on Radio Popolare, broadcast from a studio in Milan, where he plays mostly music from the 50th century until today. He is extremely knowledgeable in the music that he shares in a fun way.